An Avatar Community Forum
Menu
Log in
Register
Install the app
You are using an out of date browser. It may not display this or other websites correctly.
You should upgrade or use an alternative browser.

Wind12 said:
Cover art for issue 2 is out saw this from Exostrike on a discord...
Click to expand...

As interesting as this cover art may be, I'm also getting worried here. I can't help but feel this whole premise of Na'vi going into space will end up being ridiculous. After seeing this cover, I can't help but picture that scene from James Bond Moonraker, where the astronauts from the space shuttle and from the bad guy's space station come out into space in platoons to start firing blue lasers at each other like some literal star war. I had to laugh out loud at the absurdity when I first saw that scene. I am wondering how I could take this comic seriously after seeing this cover.

I admit, a part of me is finding the idea awesome, but it feels more like some fan fiction, rather than something that would actually be logically happening in the universe that James Cameron created with the first movie.

Donator
This is by far the worst official image I've ever seen from the franchise. I never realized just how shocking it is seeing the Na'vi outside of Pandora, and with, ugh, space suits on.

I'm not worried about it because it really could mean anything, could be an idea Jake has of how to stop the RDA, or a dream, or any number of things. Comics are notorious for drumming up excitement or interest by wild covers. But if it's taken at face value and Na'vi actually go into space in spacesuits and fight the RDA, well I'm quite sure that's not my cup of tea.

But hey I'll reserve judgement until whatever happens happens, but I have only dread towards this cover.
W

I will admit the cover is a bit out there(no pun intended) and if it was just a comic that was commissioned by Lightstorm, then I would be more uneasy, but the High Ground is based off of JC's ideas for the sequel at one point, and I just can't see JC being THAT far out there from his own idea, so I am really interested into seeing either if this is just from a Jake brainstorming session or if it is Na'vi in space, how JC gets there.

Donator
"But, any chain of events is only as strong as the weakest link, and in this case the weak link is human nature. As the plan unravels, Jake and Neytiri must race against time to return to Pandora and save their children before the starships land.

I think that Na'vi going into space in the story could be an interesting idea if handled properly and within believable territory. For example, they could show the effect of isolation from Pandora on the characters. But this pulp cover is just bad taste unbefitting of being part of Avatar canon regardless if it will represent only a brainstorm or not.

There must be several reasons why this story did not end up being used as the story for the main movie sequel. I sincerely hope that sheer silliness of the premise was not one of them. I know I should have faith in James Cameron, but honestly, imagine if Aliens had included a scene with the Xenomorphs floating in space and the colonial marines coming out of the ship to shoot at them instead of "nuking them from orbit" or just using a plain old convential bomb on them. Just imagine that for a second...either as a brainstorm or as an actual scene.
W

I'm just going to hope JC had some cool idea to make it work, maybe we will find out more later, I will say IF he did have a good plan, this, this would have been one Heck of a twist, I wouldn't have guessed it.

There is a 10 page preview up on Amazon now, if you want to avoid all spoilers leading into Avatar-The Way of Water I'd recommend skipping the preview and this book in general. 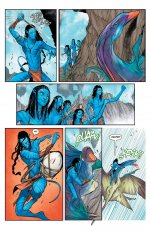 
There is a 10 page preview up on Amazon now, if you want to avoid all spoilers leading into Avatar-The Way of Water I'd recommend skipping the preview and this book in general.

Lot's of cool details and hints at what's to come in that preview. This comic is going to be a true prequel to the new movie.

I've enjoyed the other comics, but I don't think any of them have been as ESSENTIAL to fans as this appears to be. It's going to be a lot of fun reading these in the months leading to The Way of Water.
W


BansheeBob said:
Lot's of cool details and hints at what's to come in that preview. This comic is going to be a true prequel to the new movie.

I've enjoyed the other comics, but I don't think any of them have been as ESSENTIAL to fans as this appears to be. It's going to be a lot of fun reading these in the months leading to The Way of Water.
Click to expand...

You nailed it, this one is essential, and I hope the interest from these helps drive people to pick up the past series as well.
N

This will be interesting.

What happened was, we were noodling around. I was working with a team of writers. We had a lot of ideas. We kept trying to corral it into a box, and it never quite fit. So at a certain point, I said, 'I'll just finish it and see if it's a movie.' I did. It came out, I think, at 130 pages. It was like, 'Man, this is a great story. This is a hell of a read.' But it was missing one of those critical elements about sequels, which is that it didn't go enough into the unexpected. It also didn't play enough by 'Avatar' rules, which is to connect us to the dream world, that which has a spiritual component that we can't even quite quantify in words. It ticked every other box, but it didn't tick that one. And I thought,' We shouldn't make this movie.' So I set it aside.
Click to expand...

There's some great stuff in it. I mean, you've got the Na'vi fighting with bows and arrows in zero-G. I mean, I'm there! I want to see that movie. But it just didn't achieve enough of the overall story and thematic goals that I had in mind. So we're turning it into a Dark Horse graphic novel. You'll be able to see that interim battle that took place between movie one and movie two.
Click to expand...

Thanks for posting that. Nice to see some direct quotes from Cameron on this topic. I think we already understood previously in this thread that the High Ground was based on one of the rejected sequel scripts. Good to know the reason that it was rejected.

But he really does say "Na'vi fighting with bows and arrows in zero-G", so obviously what was shown on that pulp cover is going to happen. Impressive as that could be, I would be interested in knowing how Jake will motivate his warriors to do that, how he would prepare and train them for that, and the logistics of getting Na'vi-sized space suits, complete with room for their tails and queues. It sounds like an undertaking that would take months to prepare. Or they would be rushing in, possibly with severe and unforeseen consequences.

The other comic, the Next Shadow, implies that Hell's Gate is (obviously) short on resources after the bulk of the RDA personnel was exiled, so I am then wondering where they suddenly get those capabilities.
N

Na'vi in space. I've only read fanfiction with this as only Jake bringing Neytiri with him because she's curious about how he or others got to her world. Not to mention just like humans, zero gravity messes with orientation and she gets sick from nausea. Not much different than car sickness. It would be funny, but also you feel sympathy to her or any Na'vi not used to this. Depending on how long she's up there, the symptoms pass after a day.

Norm's Living God line fits this too as he, as a human, can lift a Na'vi on one finger. Astronauts can do this with heavy 30 ton equipment.
W

I just got my copy too and read it in one sitting.

Definitely a must read for fans before the new movie comes out.

I love the brother sister relationship Kiri and Spider have. And I love seeing appearances from Ikeyni and General Ardmore. Which I wasn't expecting.

It all but confirmed the theory that Spider is Quaritch's kid in my mind. They definitely treat the identity of his biological dad like it's a secret that they aren't supposed to reveal.
Reactions: Wind12

I had the opportunity to read volume 1 as well, courtesy of Wameyn/AvatarSeaofBlue & Discovering Pandora and their YouTube channels (many thanks, guys)

Both the read itself and the discussions around the pages were interesting. I still have some difficulty accepting this whole space angle, though.


Jake is right that it would probably be the last thing the RDA expects to happen, but the whole idea of an attack in zero-g runs a bit on the rule of cool if you ask me. How did they have those space suits made? (It was stated they made them instead of them already being on the base before the RDA left). A spacesuit should realistically be more than some white spandex, a glass bowl and an airtank. Also, how is it that they just happened to have a Valkyrie shuttle standing around to ferry them to space for apparently regular trainings? The ISV Venture Star had 2 Valkyrie shuttles, one of which was destroyed during the assault on the Tree of Souls and the other was used to ferry the RDA personnel back to the ISV after the defeat. It is implied in volume 1 that another ISV was scrapped and put in a graveyard orbit, so maybe the shuttle has come from there? Considering that Jake and co. appear well prepared for their mission regardless of how believable it is, I would say I can at least accept the logistical aspect.

But I found the Na'vi willingness to go along with something this extreme (compared to what they are used to) to be poorly explained. Especially since the three laws of Eywa were mentioned and highlighted in the same volume, I would think that more Na'vi would simply reject ever going into space on principle, regardless of whether or not it is technically possible for them to do so. I mean, they didn't even want roads or beer or jeans. Now they are fine with spacesuits and leaving their planet? It just doesn't quite fit with the characterization of the Na'vi that the first movie set out in the sense of "There is nothing that we have that they want." For sure I can imagine certain curious and maverick Na'vi individuals who might want to try it, but the comic didn't really shed any light on why all of them are just OK with it. And this flimsy explanation of the Na'vi having been born for zero-g... I'm sure they are naturally adept at handling extreme physical conditions regardless of what those conditions are, but what about it fitting into their worldview?
You must log in or register to reply here.
Top